“For years, I had convinced myself I couldn’t do something like this…”

During the summer of 2011, I took on my first ever long distance walk – or thru hike.  I experienced my first solo wild camp and I became hooked.  I also met some wonderful people, making friends for life.  In planning a challenge of this nature for the first time, it rarely occurs to us how transformative it is likely to be.  Believe me, whatever your challenge – do it with gusto, pour your soul into it and expect to return a different person.  This was to be 630 miles of brutal steps, sheer cliff drops, social yet solo, wind, rain, sun and everything in between and pure unadulterated views of some of the best scenery anyone could wish for.

It was bliss, despite the blisters.

It was bliss, despite the tears.

It was bliss, whatever the weather.

Up until this point, I had regularly enjoyed day walks of varying distances and terrain but never a challenge that meant I would need to carry everything I needed to survive on my back for seven weeks.  That was a PROPER adventure and who knew little me could achieve a ‘proper’ adventure?!  For years, I had convinced myself I couldn’t do something like this…

For those new to my story, I was looking for a challenge to mark my 40th birthday.  I wanted to walk for charity and I wanted it to be big.  I needed it to push me beyond my perceived limits for it to feel right.  The decision about which challenge to choose was more tricky as although Kilimanjaro and Machu Pichu came to mind (and would no doubt be wonderfully inspiring for me to undertake), they simply didn’t connect with me at that time.  The idea that I could prove to myself and others that I was actually capable of taking on a challenge and completing it was very much at the forefront of my decision-making and although it took many months for the idea to finally present itself, when it did, I realised that I had already considered walking the South West Coast Path about fifteen years previously and then ruled it out.

For so many reasons, I had given up on my pipe dream and carried on with life, until a divine moment in a branch of Waterstones in Wells, Somerset.  I wandered into the shop, only planning to browse and leave again, when a copy of the South West Coast Path handbook seemed to glow at me from a shelf.  It was like a bolt of lightning and I knew in that moment and in my heart that this was the walk that would become my 40th birthday challenge.  It was a sudden realisation that the challenge I had been searching for had been sitting in front of me all along.  I did not know at this point how much it would change my life.

WHAT WAS THE APPEAL OF THE SWCP?

Growing up in North Somerset, I was not so far away from the start of the trail.  I holidayed in Torquay for much of my childhood.  As a teenager, I began bellringing with my best friend and her family – this took us to Devon on some very memorable ringing weekends.  Cornish tin miners, I learnt are part of my ancestry.  I lived in the little village of West Lulworth in Dorset for a few years, half a mile from the famous Lulworth Cove and had explored much of the Dorset coastline already.  I felt a real affinity and connection to everything that the South West Coast Path embodied.  I now live in Poole, the other side of the harbour mouth from the end (or the start) of that wonderful path.

It took around nine months to plan my walk and I had moulded some criteria for myself around the adventure.

The first job was to request some time away from work.  At this stage, I had never undertaken a challenge of this nature and therefore couldn’t gauge how long it was going to take me.  I took around two weeks’ unpaid leave and walked the path in forty seven days.  I then began to purchase kit, collect advice and plan how long I thought each day would take me.  My biggest oversight was overestimating how much I would sensibly need to take and how much I could carry!  I left Minehead with about 18kgs of pack.  Nine years on, I now carry half that in base weight (that’s without food and water).

Out of every element of the planning for this challenge, by far THE hardest of all tasks was the fundraising.  The actual trip itself was self-funded – I used my own money to pay for food, gear and any other incidentals that arose.  My beloved Hilleberg Akto tent was kindly reduced in price by the staff at RayMears.com and I remember selling a twelve-man multi-dome tent affectionately known as the Eden Project, in order to help fund the full cost of my little one-man tent!

Students came on board to help me at the grammar school with raising money through cake sales, making sock toys, jewellery, sweetie filled handmade boxes and many other upcycled items that could be sold.  One very artistic student even designed me a logo to use – cleverly made up entirely of letters made out of pictures.

We named our club the WathWalk Club although it was later renamed as the WathWorks Club, as this was more appropriate to the activities the girls were undertaking.  On my return from the walk, students, staff, family and friends met me about seven miles from the finish (Swanage) and walked with me along the beach to South Haven Point.  I felt incredibly supported and euphoric at completing such an enormous challenge.  The WathWalk Club organised a ball called the ‘Glitz and Grammar Ball’ a few months later.  It was a grand affair, held at The Haven Hotel, a prestigious venue on the Sandbanks peninsula.  We raised around four thousand pounds to add to the sponsorship collected and money raised from craft sales and this was duly split between the three charities.

I will remain forever grateful to all those who supported me tirelessly in my endeavours during this time.  They truly kept me going throughout all the ups and downs; students, staff and family alike.

“I marvelled at this new body I was now in”.

To be honest, I don’t think I became depressed following the completion of this challenge.  If I think back, there simply wasn’t enough time to fully process the outcome or debrief within those days after returning. Very quickly, I was thrown back into the commitments of school life.  Specifics that I noted as proving tricky or just more defined observations within the first week or two were sleeping, weight loss and toilet habits!

Sleeping in a bed, within four walls and a ceiling felt odd and almost claustrophobic.  I craved the comfort of my tent and the regime of survival, organisation and routine.  I had also lost a vast amount of weight, leaving for the trek as a size 12 – 14 and returning 43 days later as a clear size 8!  This empowered me as I marvelled at this new body I was now in but it also caused many tears of despair as my lack of wardrobe meant I had to suddenly create a new me.  I had lost my identity – years of favourite jeans and dresses were now destined for the charity shop.  Finally, the freedom to pee when (and where) I needed, now had to be abated.  I had lessons to teach, timings to adhere to and then there was the issue of general house rules of not peeing on the school field…

ABOUT THE SOUTH WEST COAST PATH

The South West Coast Path stretches for 630 miles from Minehead in Somerset, into North Devon, down across the North Cornish coast, around the tip of Land’s End, South Cornwall, South Devon and into Dorset, ending at South Haven Point in Studland, a short ferry ride across the mouth of Poole Harbour.  It is the longest of our fifteen National Trails.  The last ninety miles of the walk takes in what is now designated as the Jurassic Coast; a stretch of coastline that has been granted World Heritage Status and which displays prominent evidence of geological importance throughout the different historical periods, Triassic, Jurassic and Cretaceous.  https://jurassiccoast.org/what-is-the-jurassic-coast/

A #100MappyDays 9-miler, on an unusually occurring SNOW DAY for us doon south! 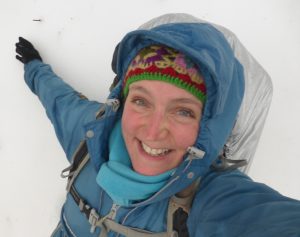